Only a few days remain until the 2021 Scottish Parliament election. This will be the most important election in Scotland’s history, given the choice of two very different futures we now face: deciding ourselves how we move forward, or being hitched to Boris Johnson’s Brexit Britain.

Arguably those with the most at stake are the youngest adults in our society – who will inherit and be affected the longest by the consequences of political decisions and policymaking. Never has this been more true, given the climate crisis we face or the aftermath of the immense impact of COVID on young people across Scotland.

But our 16 and 17 years olds – who can work and pay taxes as well as marry and join the army – are prevented from voting in UK General Elections. Indeed, 16 and 17 year olds in England cannot vote in any elections.

No-one has a bigger stake in the future of our country than today’s young people, and it is only right that they are able to have a say… In modern Scotland, giving the vote to 16 and 17-year-olds is the right thing to do.

The SNP has always believed that the right to vote should be extended to 16 and 17 year olds for all elections. All the evidence shows that, when given the opportunity, our young people’s engagement in politics is second to none.

While the UK Government prevented 16 and 17 year olds from having their say in the Brexit referendum in 2016, two years earlier those in Scotland were given their voting rights for the first time by the SNP Scottish Government in advance of the independence referendum. 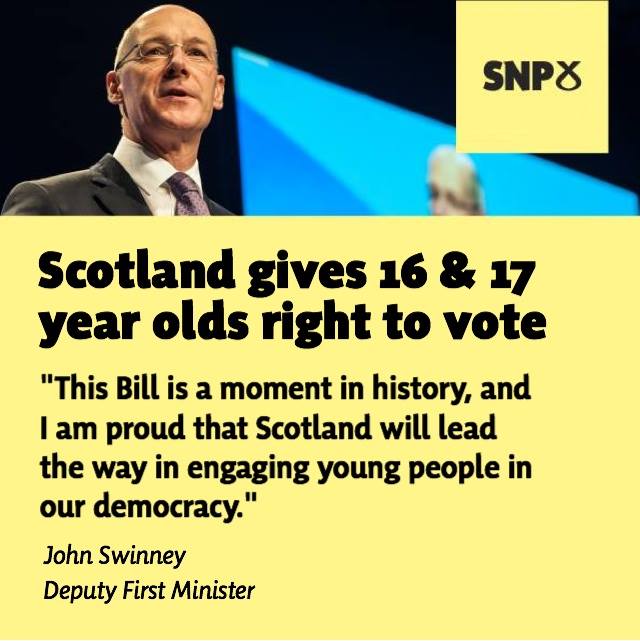 Young people’s vibrant and passionate contribution to the debate was a great legacy of that vote, with 75% turnout in this age group. In the wake of this, the SNP government moved to enshrine the voting rights of 16 and 17 year olds in Scotland in Scottish Parliament as well as local government elections.

The Scottish Election (Reduction of Voting Age) Bill was passed by MSPs in 2015. It came under an hour after the same idea was regrettably struck down in Westminster.

Also disenfranchised in UK-wide elections are foreign nationals resident here. A further resolution on extending the voting franchise in Scotland was adopted by the SNP in 2017, expressing the party’s commitment to ensuring democratic participation for all citizens.

The SNP Scottish Government has since extended the right to vote in Scottish Parliament and council elections to all foreign nationals with leave to remain, including all those granted refugee status. This gives fair access to voting rights for all those legally resident in Scotland, and this demographic will have its say in a Scottish Parliament election for the first time on May 6th.

The Scottish Elections (Franchise and Representation) Bill, a historic piece of legislation, is an example of Scotland’s ability to take the lead in making progressive reforms, and one of which we should be proud… This Government is using the powers that it has to send the message that Scotland is open, welcoming, and home to all those who so choose.