Here’s How the Tories Threaten our NHS

In an independent Scotland, we can be certain Westminster governments will not be able to threaten our NHS.

That threat is real and growing.

After dragging Scotland out of the EU against our will, Rishi Sunak and Westminster Tories are now free to put the NHS on the table in post-Brexit trade deals.

To prevent that, the SNP have pushed our NHS Protection Bill at Westminster, to write into law that the NHS must be protected from privatisation. 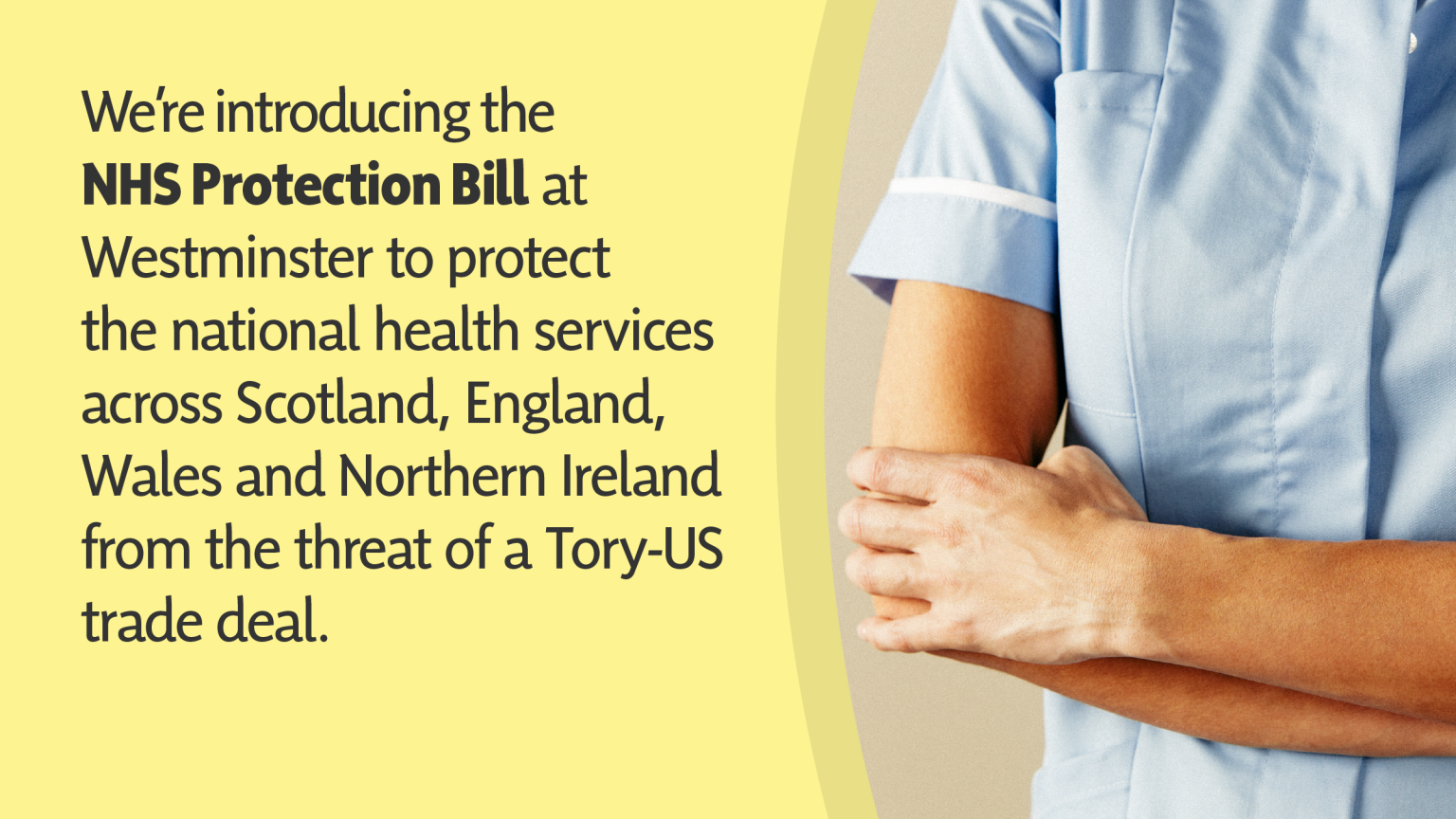 However, at every opportunity, the Tories did the opposite.

In January 2021, the Tories voted to scrap an amendment in their Trade Bill which would have enshrined “a comprehensive, publicly funded health service, free at the point of delivery” and explicitly protected the NHS from trade deals.

The Tories say they won’t open up the NHS to private companies – but if that were truly the case, why would they vote against a law that would guarantee that?

Just like the infamous Brexit bus promise of £350m a week for the NHS, which has been exposed as a lie and described as “a clear misuse of official statistics” by the UK’s own statistics authority, the Tories simply cannot be trusted on privatisation.

Scotland’s former Chief Medical Officer, Sir Harry Burns, is in no doubt that Brexit has opened the door for US private health firms: “the vultures are circling the NHS, so be very afraid.”

🏴󠁧󠁢󠁳󠁣󠁴󠁿 "If that happens, an independent Scotland within the EU will sound very appealing to many more voters."https://t.co/d1POokuNAs

From Rishi Sunak down to his most senior ministers, the Westminster Tories have made it clear they want to see a cut to Scotland’s public services funding.

Jeremy Hunt is imposing austerity 2.0, even after research found that the first round of Tory austerity has lead to almost 20,000 deaths in Scotland.

And Deputy Prime Minister Dominic Raab, who co-authored a pamphlet advocating NHS privatisation, has also attacked Scotland’s share of UK spending – complaining that we have too many ambulance staff and nurses.

🏴󠁧󠁢󠁳󠁣󠁴󠁿 People in Scotland should be aware that the new Brexit Secretary @DominicRaab campaigned to scrap the Barnett Formula. pic.twitter.com/Izoxw0oSyp

It’s clear that this is a UK government that simply can’t be trusted with our NHS.

Drug companies in America believe the NHS pays too little for medicines, which reduces their profits – and they’ve made it clear they want that to change as part of any post-Brexit trade deal.

The former UK ambassador to the US has said: “Do they want us to pay more for their pharmaceuticals? Do the pharmaceutical companies want to use this leverage? Of course they do.”

Paying more money out of the NHS budget, so that US drug companies can hike up their profits, would clearly impact the amount of money available for other priorities.

Even a 20% increase in prices would add £360m onto NHS Scotland’s medicines bill – equivalent to the cost of a fifth of qualified nurses working in Scotland.

The anti-immigration policies brought in by the Westminster Tory government are making it harder to recruit health and care workers.

It’s a migration system guided by pandering to Trumpian politics and designed purely to appease the hard-right Brexiteers, while disregarding the needs and interests of vital sectors such as care. 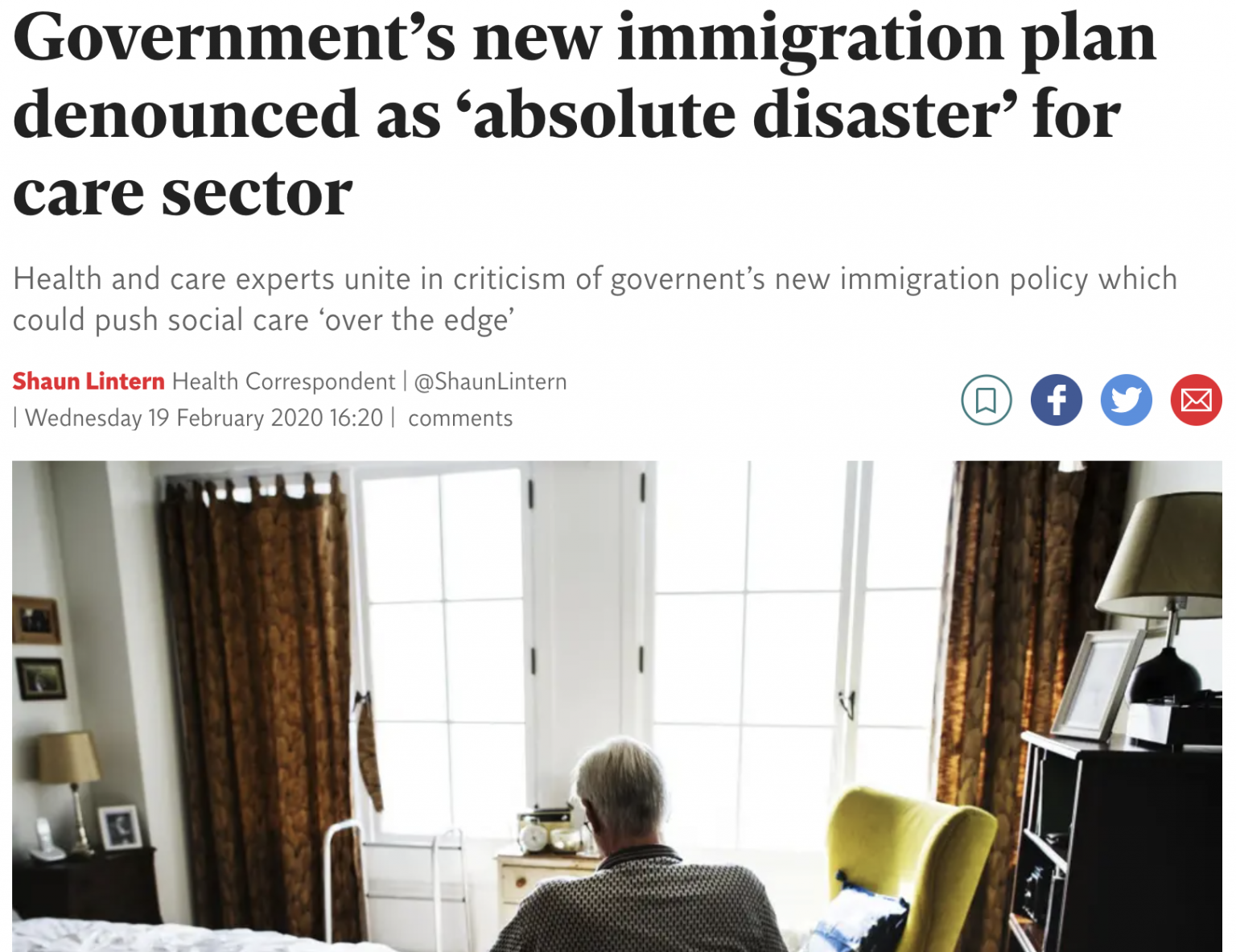 A report from Nuffield Trust outlined the devastating impact on health and social care, warning that the draconian Tory policies are “exacerbating dire workforce shortages” – at a time when health staff are needed more than ever.

The head of Scottish Care has also slammed the migration policy, saying: “the door has been shut to care homes and homecare providers in Scotland to recruit internationally”.

Today I’m saddened that from now because of @GOVUK #immigration the door has been shut to #carehomes and #homecare providers in #Scotland to recruit internationally. #Socialcare voices were ignored by @pritipatel. We are much poorer in care and more at risk because of this.

The British Medical Association has said “the NHS in England has been forced down a route of increased marketisation and privatisation”.

In Scotland, because of the Scottish Parliament, we’ve been able to choose a different path, resist creeping NHS privatisation, and pass progressive policies such as the scrapping of prescription fees.

But a lot of that may be under threat from the “power grab” legislation passed by the UK government – the Internal Market Bill – giving Tory ministers the power to open up “healthcare services provided in hospitals or other healthcare facilities” in Scotland to what they call “market access principles”.

And worse still, their law says Holyrood can’t do anything about it.

This Westminster power grab bill puts into action the Tory government’s casual contempt for devolution – and it’s now clearer than ever that the only way to protect our Scottish Parliament is with independence.

🚨 The Tories’ economic plans for Brexit UK have been exposed as a full-frontal assault on devolution.

📺 Watch this video to find out why and share it with your followers, friends and family.

Scotland’s right to choose independence and protect our NHS

The Tories claim they have no intention of privatising our NHS.

But in the 2014 independence referendum campaign, they said they wouldn’t take us out of Europe – and they did.

They then said they would never sell out the Scottish fishing industry – and they did.

They said they would not launch a power grab on the Scottish Parliament – but they did.

So why should we trust what they say on the NHS?

The only guaranteed way for Scotland to choose how it runs our NHS is with independence from the Tory-dominated Westminster.