The SNP believes that there is no place in Scotland for prejudice or discrimination, and that everyone deserves to be treated fairly, regardless of their sexual orientation. Scotland is considered one of the most progressive countries in Europe in terms of lesbian, gay, bisexual, transgender and intersex (LGBTI) equality, and the SNP has a proud record of advancing and championing LGBTI rights while in government.

Scotland under the SNP was the first UK country to consult on same-sex marriage, and has delivered the most progressive and extensive equal marriage legislation. The SNP Scottish Government delivered equal civil partnerships as well as the pardon for historical ‘homosexual offences’.

The SNP also opened up adoption and IVF for same-sex couples, reformed blood donation rules, established a Working Group on Non-Binary Equality and made Scotland the first country in the UK to approve the provision of PrEP by the NHS. And we passed the Hate Crime Act at the end of the last parliament – making it an offence to stir up hatred against people on the grounds of sexual orientation, transgender identity and variations in sex characteristics.

We continue to demand the full devolution of equality, employment and immigration powers so that the Scottish Parliament has the powers to protect LGBTI equality and make Scotland a fairer and more equal place to live. There is no place for conversion therapy in Scotland, and a re-elected SNP government would bring forward our own legislation to ban this insofar as is possible if the UK Government does not act on its commitment to do so. 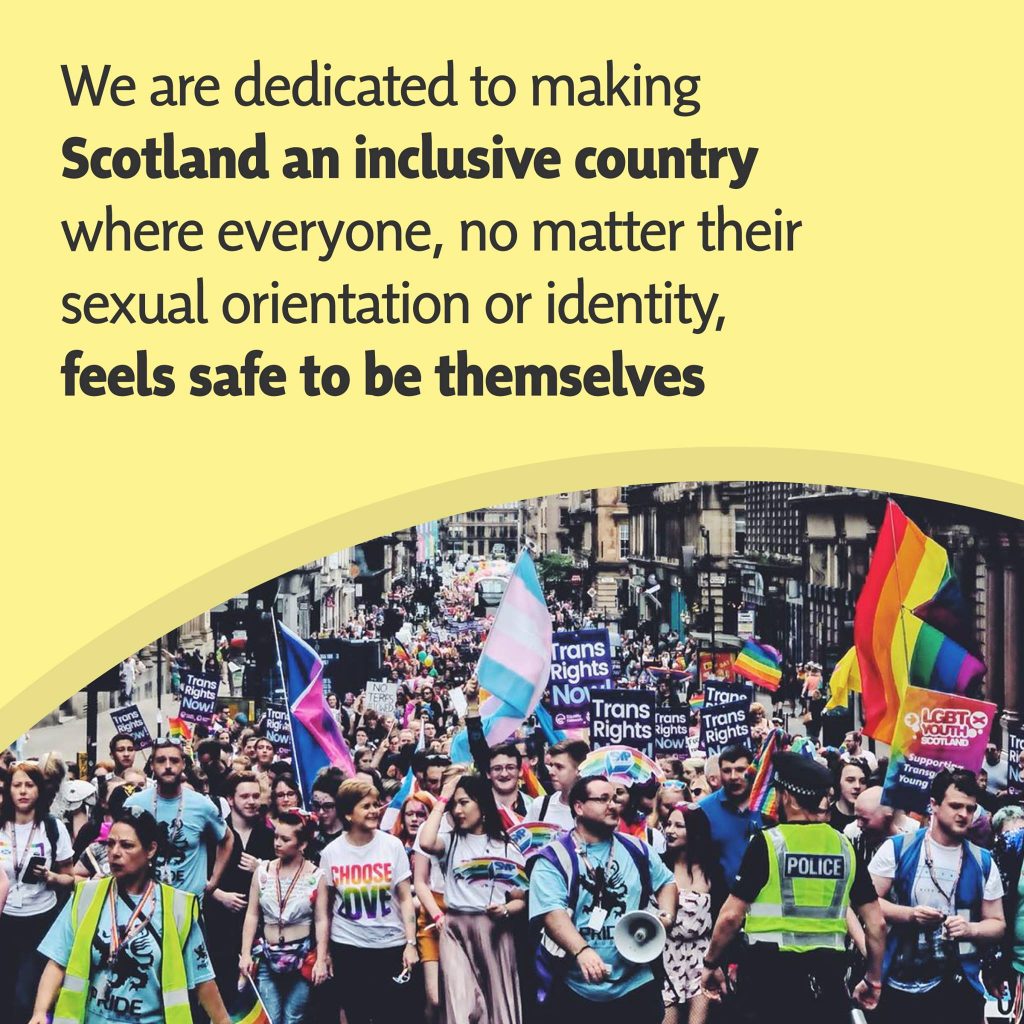 The SNP remains fully committed to progressing delivery of the world‐leading recommendations on LGBT Inclusive Education across the curriculum. The SNP believes an educational approach to tackling homophobic, biphobic, and transphobic bullying and prejudice in schools is essential – and that LGBT history, role models and equalities education should be taught in schools.

To achieve this, the SNP Scottish Government has funded Time For Inclusive Education (TIE) to work with decision makers, produce curriculum resources and deliver services for teachers and pupils. The SNP is committed to that work and will continue to fund it until the prejudice that has blighted too many young lives is eradicated.

Re-elected, the SNP will introduce an overarching Scottish Diversity and Inclusion Strategy covering the public sector, educational institutions, justice system, and workplaces – focussed on the removal of institutional, cultural and financial barriers which lead to inequalities. Data collection would also be increased and improved so that across all our policies we will be able to have a strong evidence base, measure outcomes, and recommend improvements.