Our Action on Gender Equality

Equality for women is at the heart of the SNP’s vision for a fairer country. Scotland ranks third in the world for political empowerment for women and is significantly ahead of the rest of the UK. But there is still much more to achieve.

Nicola Sturgeon is Scotland’s first female First Minister and her Cabinet was one of only a handful in the world to become gender balanced – we are equally determined to improve gender balance in the Scottish Parliament. For the forthcoming Scottish Parliament election we will have 36 women standing in the 73 constituencies across Scotland, and women top the SNP list in six of the eight electoral regions.

The SNP  stand up for gender equality at every turn – working for an end to austerity, for equal pay, more and better jobs and to end the barriers that still block the aspirations of too many women in Scotland and across the UK.

To increase the number of women in leadership roles across the wider public sector, we have passed the Gender Representation on Public Boards (Scotland) Bill. The new law – the first of its kind in the UK – will ensure that 50 per cent of non-executive members on public boards in Scotland are women. 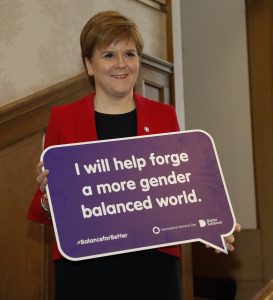 We have published our Gender Pay Gap Action Plan, the first for Scotland and for any UK administration, which will help the Scottish Government meet its commitment of reducing the gender pay gap by 2021.

As part of this plan, we are investing £5 million over the next three years to support around 2,000 women to return to work after career breaks and will help to improve workplace practices, including support for women during menopause and for victims of domestic abuse, through the expansion of the Workplace Equality Fund.

We will encourage organisations to sign up to the Business Pledge, including the commitment to workforce diversity, and to join the Partnership for Change campaign to set a voluntary commitment for gender balance in their boardrooms of 50:50 by 2020.

We also require all public authorities with more than 20 employees to publish their pay gap every two years and an equal pay statement every four years, and will call on the UK government to follow this lead. SNP MPs will also support lowering the current threshold for gender pay reporting to 150 employees and the introduction of sanctions, including fines, for employers that fail to comply with the law.

We are ensuring that the voices of women and girls are heard at the highest levels of politics. The First Minister established an Advisory Council on Women and Girls to inform the Scottish Government on the inequalities they face and how best to tackle it.

We have also established a working group to tackle pregnancy and maternity discrimination in the workplace. And at Westminster will fight to protect the rights of pregnant women and new mothers afforded under EU laws.