Rail Fit for the Future

Rail provides vital connections between our cities, our communities, our businesses, and showcases all that Scotland has to offer. The SNP in government has and will continue to support, expand and future-proof our rail infrastructure.

The railway is part of the fabric of our nation’s economy and well-being, and supports over 13,000 jobs – around 9000 of those directly. The SNP Scottish Government is actively embracing new techniques and new thinking on rail – all with the aim of delivering rail enhancements which bring tangible benefits to Scotland’s passengers and freight.

Since coming to power in 2007, the SNP has invested over £9 billion invested in Scotland’s rail infrastructure. The SNP government delivered the Borders Railway – the longest new domestic railway to be built in Britain in over 100 years, with 4 million passengers using the service to date.

The Borders Railway carried over one million passengers in its first year. Find out more: https://t.co/INgEX2Pr2D pic.twitter.com/yUdHUUYBMu

And the SNP is committed to a strong, sustainable railway that meets future demand. The SNP Scottish Government has published an action plan to decarbonise Scotland’s railway by 2035.

The massive projects that have been delivered so far – the electrification of the Central Belt, new electric trains – mean more seats and faster journeys for customers, as well as a rail service that is better for our environment. This plan will deliver even more for our passengers in the decades to come.

Moreover, the SNP government is now bringing Scotland’s railways into public hands – from the expiry of the current Scotrail franchise in 2022. This will provide stability and certainty for passengers and staff, with operation by an arm’s-length company owned and controlled by the Scottish Government. 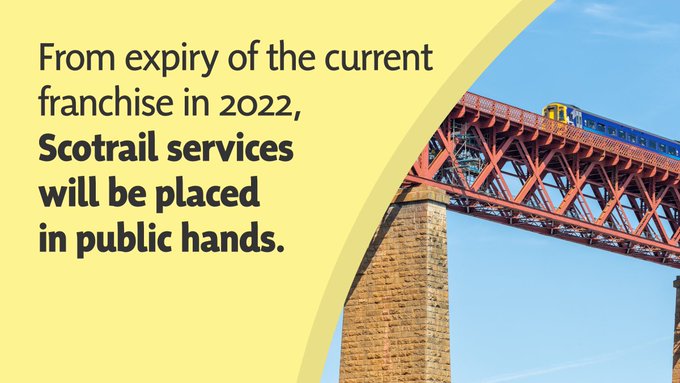